“If we regard the various forms of outer nature — let us remain at first in the mineral world — we find the most manifold forms. We speak of them as crystal forms. We also find other forms in nature, however, and we find that a certain configuration, an inner configuration, arises when, let us say, carbon, hydrogen, oxygen, nitrogen, and sulfur are combined. We know that when carbon and oxygen combine and form carbon dioxide, a gas of a certain density arises. When carbon combines with nitrogen, cyanuric acid arises, and so on. Substances are formed that a chemist can always trace; they do not always appear in an outer crystallization, but they have an inner configuration. In modern times — this inner configuration has even been designated by means of the well-known structural formulae in chemistry.

Something has always been taken for granted in this, namely that the molecules, as they are called, become more and more complicated the more we ascend from mineral, inorganic substance to organic substance. We say that the organic molecule, the cellular molecule, consists of carbon, oxygen, nitrogen, hydrogen, and sulfur. It is said that they are connected in some way but in a very complicated way. One of the ideals of natural science is to discover how these individual atoms in the complicated organic molecules are connected. Nevertheless, science admits that it will still be some time before we shall discover how one atom is connected with another within organic substance, within the living molecule. The mystery here, however, is this, that the more organic a substance is, the less one atom will be chemically connected with another, for the substances are whirled about chaotically, and even ordinary protein molecules, for instance in the nerve substance or blood substance, are in reality inwardly amorphous forms; they are not complicated molecules but inorganic matter inwardly torn asunder, inorganic matter that has rid itself of the crystallization forces, the forces that hold molecules together and connect the atoms with one another. This is already the case in the ordinary molecules of the organs, and it is most of all the case in the embryonic molecules, in the protein of the germ. 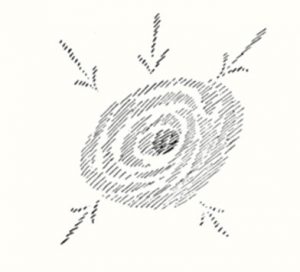 If I draw the organism here (see drawing), and here the germ — and therefore the beginning of the embryo — the germ is the most chaotic of all as far as the conglomeration of material substance is concerned. This germ is something that has emancipated itself from all forces of crystallization, from all chemical forces of the mineral kingdom, and so on. Absolute chaos has arisen in this one spot, which is held together only by the rest of the organism. Because of the fact that here this chaotic protein has appeared, there is the possibility for the forces of the entire universe to act upon this protein, so that this protein is in fact a copy of the forces of the entire universe.”