“A man who still lived in a perception of the Ptolemaic system did not say: “There is the Moon up yonder”. No, he did not; the people of today only attribute that idea to him, nor does it do the system justice. If he had simply said, “Up yonder is the Moon”, he would have been relating the phenomenon to his whole human being, and in so doing the following was his idea: — Here am I standing on the Earth. Now, even as I am on the Earth, so too am I in the Moon, — for the Moon is here (Figure 1, lightly shaded area). 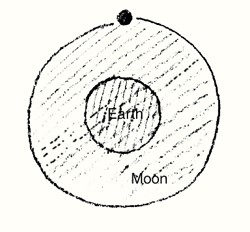 This (the small central circle in the Figure) is the Earth, whilst the whole of that is the Moon, — far greater than the Earth. The diameter (or semi-diameter) of the Moon is as great as what we now call the distance of the Moon (I must not say, of the Moon’s centre) from the centre of the Earth. So large is the Moon, in the original meaning of the Ptolemaic system. Elsewhere invisible, this cosmic body at one end of it develops a certain process by virtue of which a tiny fragment of it (small outer circle in the Figure) becomes visible. They rest is invisible, and moreover of such substance that one can live in it and be permeated by it. Only at this one end of it does it grow visible. Moreover, in relation to the Earth the entire sphere is turning, (Incidentally it is not a perfect sphere, but a spheroid or ellipsoid-of-rotation. The whole of it is turning and with it turns the tiny reagent that is visible, i.e. the visible Moon. The visible Moon is only part of the full reality of it.
The idea thus illustrated really lived in olden time. The form at least, the picture it presents, will not seem so entirely remote if you think of an analogy, — that of the human or animal germ-cell in its development (Fig. 2).

You know what happens at a certain stage. While the rest of the germinal vesicle is well-nigh transparent, at one place it develops the germinative area, so called, and from this area the further development of the embryo proceeds. Eccentrically therefore, near the periphery, a centre forms, from which the rest proceeds. Compare the tiny body of the embryo with this idea of the Moon which underlay the Ptolemaic system and you will have a notion of how they conceived it for it was analogous to this.

In the Ptolemaic conception of the Universe, we may truly say, quite another reality was ‘Moon’ — not only what is contained in the Moon’s picture, the illuminated orb we see. This, then, is what happened to man after the time when the Ptolemaic system was felt as a reality. The inner experience, the bodily organic feelings of being immersed in the Moon was lost. Today man has the mere picture before him, the illuminated orb out yonder. Man of the Fifth post-Atlantean Epoch cannot say, for he no longer knows it: “I am in the Moon, — the Moon pervades me”. In his experience the Moon is only the little illuminated disc or sphere which he beholds.

It was from inner perceptions such as these that the Ptolemaic system of the Universe was made: These perceptions we can henceforth regain if we begin by looking at it all in the proper light: we can re-conquer the faculty whereby the whole Moon is experienced. We must admit however, it is understandable that those who take their start from the current idea of ‘the Moon’ find it hard to see any such inner relation between this “Moon” and life inside them. Nay, it is surely better for them to reject the statement that there are influences from the Moon affecting man than to indulge in so many fantastic and unfounded notions.

All this is changed if in a genuine way we come again to the idea that we are always living in the Moon, so that what truly deserves the name of ‘Moon’ is in reality a realm of force, a complex of forces that pervades us all the time. Then it will no longer be a cause of blank astonishment that this complex of forces should help form both man and beast. That forces working in and permeating us should have to do with the forming and configuration of our body, is intelligible. Such then are the ideas we must regain. We have to realise that what is visible in the heavens is nor more than a fragmentary manifestation of cosmic space, which in reality is ever filled with substance. Develop this idea: you live immersed in substance — substances manifold, inter-related. Then you will get a feeling of how very real a thing it is. The accepted astronomical outlook of our time has replaced this ‘real’ by something merely thought-out, namely by ‘gravitation’ as we call it. We only think there is a mutual force of attraction between what we imagine to be the body of the moon and the body of the Earth respectively. This gravitational line of force from the one to the other — we may imagine it as it turns to get a pretty fair picture of what was called the ‘sphere’ in ancient astronomical conceptions — the Lunar sphere or that of any planet. This, then, has happened: What was once felt to be substantial and can henceforth be experienced in this way once more, has in the meantime been supplanted by mere lines, constructed and thought-out.

We must then think of the whole configuration of cosmic space — manifoldly filled and differentiated in itself — in quite another way than we are wont to do. Today we go by the idea of universal gravitation. We say for instance that the tides are somehow due to gravitational forces from the Moon. We speak of gravitational force proceeding from a heavenly body, lifting the water of the sea. The other way of thought would make us say: The Moon pervades the Earth, including the Earth’s hydrosphere. In the Moon’s sphere, something is going on which at one place it manifests in a phenomenon of light. We need not think of any extra force of attraction. All we need think is that this Moon-sphere, permeating the Earth, is one with it, one organism all together, an organic whole. In the two kinds of phenomenon we see two aspects of a single process.

In yesterday’s more historical lecture my object was to lead you up to certain notions, — essential concepts. I could equally well have tried to present them without recourse to the ideas of olden time, but to do so we should have had to take our start from premises of Spiritual Science. This would have led us to the very same essential concepts. 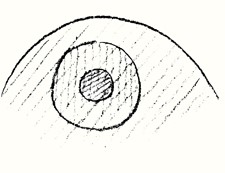 Imagine now (Fig. 3): Here is the Earth-sphere, — the solid sphere of Earth. And now the Lunar sphere: I must imagine this, of course, of very different consistency and kind of substance. And now I can go further. The space that is permeated by these two spheres, — I can imagine it permeated by a third sphere and a fourth. Thus in one way or another I imagine it to be permeated by a third sphere. It might for instance be the Sun-sphere, — qualitatively different form the Moon-sphere.

I then say I, am permeated — I, man, am permeated by the sun — and by the Moon-sphere. Moreover naturally there is a constant interplay between them. Permeating each other as they do, they are in mutual relation. Some element of form and figure in the human body is then an outcome of the mutual relation. Now you will recognise how rational it is to see the two things together: On the one hand, these different cosmic substantialities permeating the living body; and on the other hand the organic forms in which you can well imagine that they find expression. Form and formation of the body is then the outcome of this permeation. And what we see in the heavens — the movement of heavenly bodies — is like the visible sign. Certain conditions prevailing, the boundaries of the several spheres become visible to us in phenomena of movement.”